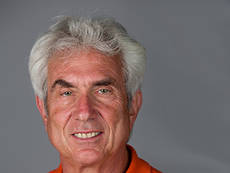 Biography of Dr. Michael Karin
Dr. Karin received his BSc in Biology in 1975 at Tel Aviv University, Tel Aviv, Israel and his Ph.D. in Molecular Biology in 1979, at the University of California, Los Angeles.  Dr. Karin is currently a Distinguished Professor of Pharmacology and Pathology at the School of Medicine, University of California, San Diego, where has been on the faculty since 1986. Dr. Karin has received numerous awards including the Oppenheimer Award for Excellence in Research from the Endocrine Society in 1990, an American Cancer Society Research Professorship in 1999, the C.E.R.I.E.S. Research Award for Physiology or Biology of the Skin in 2000, the Harvey Prize in Human Health in 2011, the Brupbacher Prize in Cancer Research in 2013 and the William B. Coley Award for Distinguished Research in Basic and Tumor Immunology in 2013. He was a cofounder of Signal Pharmaceutical (currently Celgene) and served as a member of the National Advisory Council for Environmental Health Sciences. He has been an American Cancer Society Research Professor since 1999. Dr. Karin was elected as a member of the US National Academy of Sciences in 2005, the Institute of Medicine in 2011 and as an associate member of the European Molecular Biology Association in 2007. Much of Dr. Karin’s current activity is focused on understanding the link between inflammation, cancer and metabolic disease as well as on understanding the signaling mechanisms used by receptors involved in inflammation and innate immunity. In addition to establishing molecular links between obesity, inflammation and cancer, this work has revealed new targets for cancer prevention and therapy.